Visitors can enjoy performances of the famous sword dance events of Moreška, Kumpanija and Moštra - time-honoured links with a past.

The island is uniquely known for its remarkable sword dances in the town of Korcula and in six other places.
The dances are traditionally performed on saints’ days, as well as during the tourist season.
In the villages of Žrnovo, Pupnat, Čara, Smokvica, Blato and Vela Luka the Kumpanjija and Moštra dances are accompanied by a bagpipe and drum, while in Korčula, the Moreška dance is accompanied by a full brass band.
After Kumpanjija and Moštra , women join the men to dance the stari bal ( ancient dance), also accompanied by bagpipe.

Other dances that became popular during the 18th and 19th centuries, such as the četvorka (quadrille), waltz, polka, manfrina are also performed.

Performed only by men from Korčula town families, the mock battle dance with each soldier holding two swords is traditionally performed on July 29 (St. Theodore's Day) and weekly during the summer tourist season.
Documentation shows that the Moreška sword dance has been performed in Korčula since at least the 17th century.
However, the dance might be older given that double swords were part of a fighting technique in the 16th century.
Dramatic dialogue sets the context for the two armies to do battle for "Bula" (a lovely young maiden), who was abducted by Moro, Arab King.
The clashing, sparking swords in seven battles ends with “Bula” being freed from her chains and returned to her beloved Osman, the Turkish King.

Historically, the accompaniment for Moreška was based on the musical fashion of the period, as the town of Korčula was influenced by European cultural trends. Today, a brass band plays a 20th century arrangement composed by Krsto Odak specifically for Moreška. The battle is more than just a folkloric performance; it is part of Korčula's identity and a symbol of Korčula’s struggle for freedom through the centuries.

Five villages across the island (Pupnat, Čara, Smokvica, Blato, Vela Luka) continue to perform a sword dance with a type of sword whose style dates to the 16th-17th centuries. The men are organized into a village military unit with a captain and flag-bearer, with each soldier holding a single long sword. Dialogue precedes the main performances, where the captain of the army asks permission from the head of the village to perform their "ples od boja" (war dance). The captain leads his soldiers into synchronized and highly coordinated formations where each soldier holds the tip of his compatriot’s sword to form a single linked group. When the link is complete, the soldiers are led into fencing practice that tests the soldier's ability, while leaping and skipping. 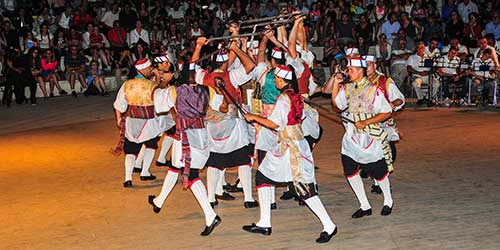 The linked and unlinked sword techniques of the dance are accompanied by a bagpiper and drummer.
The dates of the performances can be found in the event calendar.

In the village of Žrnovo the single-sword dance Moštra is performed on August 15, the feast day of Assumption of Mary, a day before St. Rocco - patron saint of Postrana in front of St. Rocco's church in Postrana. The captain leads his soldiers into synchronized and highly coordinated formations where each soldier holds the tip of his comrade’s sword to form a single linked group. The linked and unlinked sword technique of the dance are accompanied by a bagpiper and drummer. 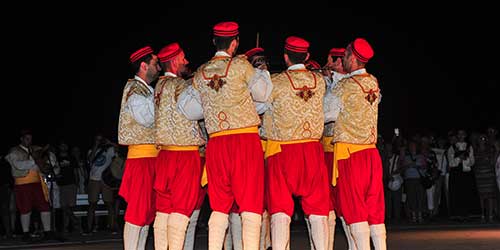 Carnivals are popular on the island, beginning with the day of The Three Kings and lasting until the beginning of Lent.
At the end of the carnival, the "Krnoval" effigy is burnt. 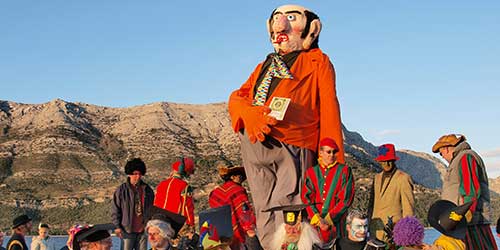 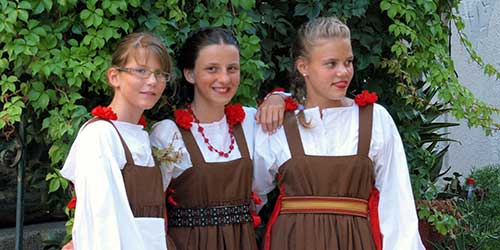 'Klapa' is a group of six or nine singers performing traditional acapella.
Most of the island's songs are about fishermen and seamen and their sweethearts. Some of them are happy and delightful, while others are melancholic, seeking the return of their beloved.
Most places on the island have 'Klapa' groups as a way of keeping traditions alive.
Acapella is very popular in Croatia and among the visitors. 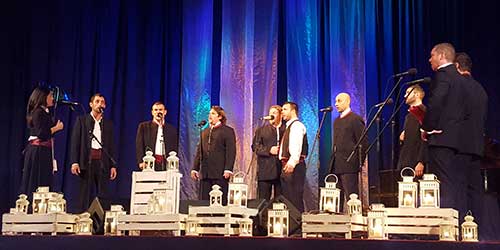 One of the most popular events in Korčula town is the masked welcome of the half new year on June 30th with a carnival parade.

Stonemasonry is not as important today as it was centuries ago. The skill dates back to the ancient times. However, some 50 Korčulans still retain and practice these skills. Good quality stone from Korčula quarries ("kave") was widely known and exported all over the world. Stone from Korčula is incorporated in some of the best known buildings in the world such as the Hagia Sophia in Istanbul, Vienna Parliament, Stockholm Town Hall and etc. In the 15th and 16th centuries, both local and Italian architects and builders erected richly decorated mansions and churches. The master builder from Korčula, Marko Andrijić, completed the belfry and raised the ciborium (canopy) above the main altar of St. Mark's Cathedral. The altar painting was painted by the Italian artist Jacopo Tintoretto. The most beautiful public and private buildings in Dalmatian towns such as Dubrovnik, Hvar, Kotor etc. were also built with Korčula stone. This millennium-long tradition has brought to the stage of contemporary Croatian culture the greatest sculptor Frano Kršinić and many other Korčulan and Lumbardan sculptors: Radica, Pallavicini, Trpimir Ivančević, the brothers Ivo and Lujo Lozica, Stecca, Radovanović, Jurjević-Knez and Duhović. 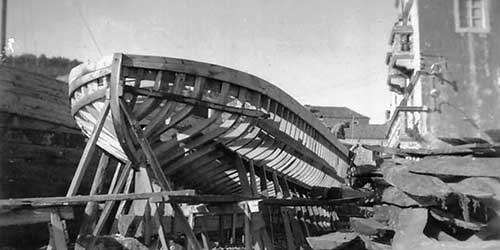 Shipbuilding - Since Hellenic times wood had traditionally been used for ship building. Today the traditional ship yards no longer exist but are replaced by modern ones, present in Korčula, Blato and Vela Luka (fibreglass). In St. Mark's Cathedral the celling of the central aisle (reconstructed in 1961) is reminiscent of a boat, a ling with the traditional Korčulan profession of shipbuilding.
Seamanship - Korčulans are skilled and respected seamen, sailing under Croatian and numerous international flags.

Forestry and wood-working are also important. Forestry was the main occupation of the inhabitants of Pupnat. They used to collect resin and make lime and charcoal for use in Korčulan workshops. The women would transport firewood to Korčula, using mules and donkeys.

In Korčula Town museum there is a replica of an old kitchen in the attic, where the visitor can get an impression of the functional arrangement of medieval dwelling houses.

Business was conducted on the ground-floor, the living quarters were on the first and second floors and the attic, affording some fresh air, was the kitchen.