There is a legend according to which Korčula was named after the nymph Korkyra who was transformed into an island paradise by the jealous Poseidon. All the civilizations that settled on the Island have left their mark, such as: the Illyrians, Greeks, Romans, Croatians, Venetians, and Austro-Hungarians. 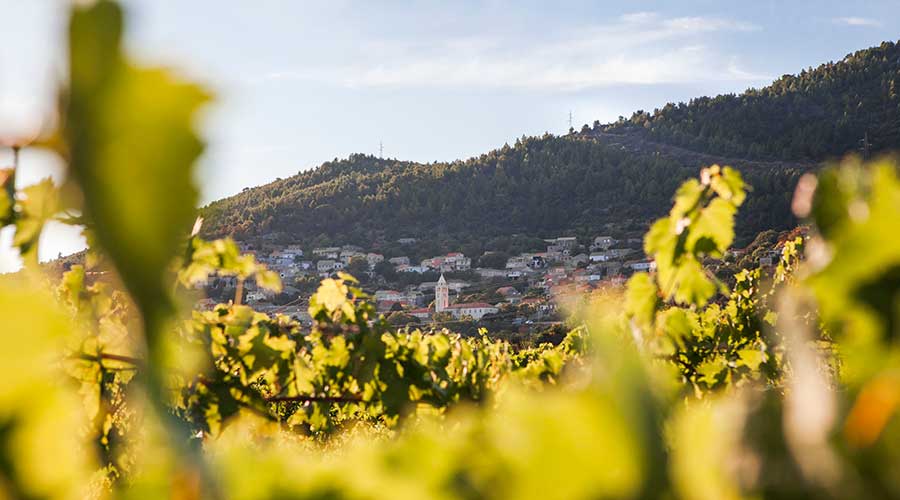 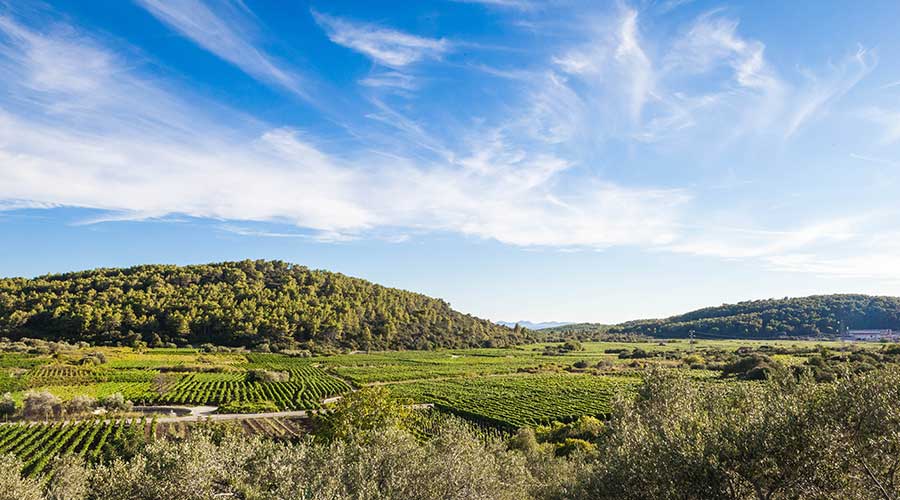 KORKYRA MELAINA
Two thousand five hundred years ago the Greeks named Korčula Korkyra Melaina (Black Korkyra) for its dense Mediterranean vegetation, and the Romans called it Corcyra Nigra. In addition to its natural beauty and its rich cultural heritage, it has been famous for its millennia-old tradition of winemaking. Unlike the rest of Dalmatia, which is known mostly for its red wine varieties, the Island of Korčula is renowned above all for the quality of its white wine made from its native grapevine varieties. In the central region of the Island, Pošip and Rukatac varieties are cultivated, while in Lumbarda, on the eastern side of the island, there are vineyards of Grk. Among the red wine varieties, the most popular one is Plavac Mali. The wine of Korčula is celebrated for its excellent properties, for its complexity, the accentuated varietal aroma and for the high alcohol content b it reflects the Mediterranean sunshine, scents and tastes. It is distinguished for its exceptionally low acidity - unusual among southern wine varieties - and this is why it is such a pleasure to drink it.
White and red wine varieties:
Pošip Rukatac Grk Plavac mali
White wine

Pošip is native to Korčula and it is unique in the world, since we know the exact place of its discovery and the name of the grape grower who discovered it in the late 19th century. It is one of the first white wine varieties to be protected by the Croatian law.
Pošip is traditionally grown in the central area of the Island, in the villages of Smokvica and Čara, and has lately spread to other vineyards in the region.
The wine is of splendid, straw-golden yellow color. Its flavor is rich and concentrated, leaving a thick trail in the glass, and it is pleasant, well-balanced and full-bodied on the palate. Pošip goes well with all the fish, shellfish and white meat dishes. It is best served at a temperature of 12-14B0C.

The Dalmatian grapevine variety Maraština, known on the Island of Korčula as Rukatac, found an ideal environment on this island more than a thousand years ago. Celebrated for its excellence, it is often used to improve the taste of other wines.
In the past, it was mostly prepared as a dessert wine, but today it is produced mostly as a dry wine. The light yellow colour, fullness and balance of this wine reflect the local environment - Rukatac will not leave you indifferent!
This elegant southern wine is best served with seafood and roast meat, cooled to 12B:C.

The village of Lumbarda is famous for its Grk, which is made from the native grape variety bearing the same name which grows well on its sandy soil.
We do not know whether Grk got its name from its refined tart taste (grk means bitter or tart in Croatian) or from the Greeks who established a settlement on this tip of the Island of Korčula back in the 3rd century B.C. and planted the first vineyards here. A rich ancient wine-growing tradition combined with modern technology and enology produced a dry wine with quite exceptional properties: it is recognized by its lightgreen-yellow color with golden reflections, its emphatic cultivar aroma and its noble bouquet. It has a rich, harmonious and well-rounded taste with a long, slightly tart aftertaste. Grk goes best with all seafood, as well as with white meat, but can also be served as an aperitif. It should be served cold at 12-13B:C.

Plavac Mali is native to southern Dalmatia and it is the most popular and best-known Croatian red wine.
It is grown on the southern slopes of the Island, except in Lumbarda where it is cultivated not only because it generates a good wine itself, but also in order to help grow the grape variety of Grk .
Unlike most varieties of vine, Grk has only a female flower, so Plavac Mali is grown alongside it as a pollinator. The wine from Plavac Mali grapes is dark red, even garnet colored with traces of purple, and has a rich fruity bouquet embedded in a cultivar aroma and a warm, full and refined, well-rounded, pleasantly acerbic-to-soft taste.
Plavac Mali goes well with fine food prepared with dark meat, especially game, as well as with fish and aged cheese. It should be served at 18B0C.

12B0C / served
The Dalmatian grapevine variety of Maraština, known on the Island of Korčula as Rukatac. 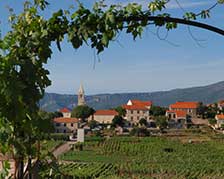 12-13B0C / served
GRK means bitter or tart in Croatian and Greeks who established a settlement in Lumbarda.
RED WINE

We wish take you on a Gourmet Tour around Korčula, as Veljko Barbieri calls it:
'As the natural beauty and the rich cultural and ethnological diversity shape the Island of Korčula, it owes its appearance to the local cuisine, as well. The traditional dishes are included into an entire cookbook containing the original recipes. We will start our tour with a dish named Korčulanska pašticada. It is a Korčula-style beef stew evoking the scent of both the antiquity and medieval times, a dish very popular in Dalmatia. It is hard to imagine the menus of the Island without Žrnovski makaruni, a famous home-made pasta typical of the Island. In Korčula, it is served with meat and fish sauces.
SEA FOOD

Cultural and civilization influences of many nations came from the sea. People lived off the sea and with the sea. Therefore, it is no surprise that Korčula cuisine is replete with a variety of fish dishes, the most popular one being Popara, a special kind of fish stew, similar to other local fish stew dishes, such as lešada and brodet (...) The deep interior of the Island has preserved its history and long tradition which are reflected in its cuisine, as well. We must mention the octopus cooked in its own juices, as it is prepared on the Island. Once you taste it, you can discover the scents and flavors of Korčula, and it feels like exploring the present and the past of the Island of Korčula with your palate, as well as discovering the charm of this unique island with its heritage having emerged from its environment, forming a blend of tradition and external influences, as the spices and ingredients are mixed together in a rich and traditional gastronomic culture of the Island'.

Some thousand family farms produce olive oil. In 2016, Korčula olive oil received a prestigious certificate of the protected designation of origin and the protected geographical indication at the EU level.

adriatic / healthy sea food
People lived off the sea and with the sea. Therefore, it is no surprise that Korčula cuisine is replete with a variety of fish dishes.